Tomokazu Matsuyama has taken over the Bowery Wall in New York.

While the world-famous artists such as Keith Haring and Banksy have painted on that very same wall, yet another masterpiece has been created. On September 24, with the help of 10 assistants, Matsuyama spent 14 days turning this massive 120 square-meter space into a work of art.

If you happen to visit New York, stop by SoHo and check out the latest version of the Bowery Mural. 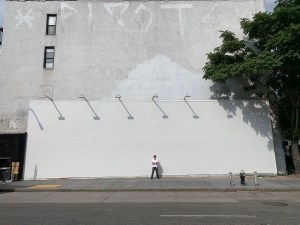 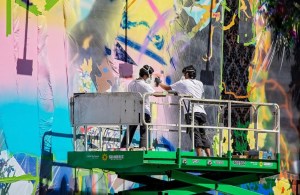 Bowery Wall is located on the corner of Bowery and Houston Street in New York City. In 1982, Keith Haring, a young emerging street artist in his 20s, was the first man to paint on the wall.

Goldman Properties, a real estate developing company took the ownership of the wall in 1985. Haring’s work was up for only a few months before they painted it over. His work eradicated, the wall was used solely for advertising purposes for over two decades.

In 2008, Tony Goldman from Goldman Properties, together with gallerist/curator Jeffery Deitch, began the Bowery Mural project that we know today — they would select a street artist from around the world to work on a mural, periodically renewing the wall by inviting the next artist. The project started off in May; the first mural was a tribute to Haring by reviving the work from 1982, to celebrate and commemorate the 50th anniversary of his birth.

Ever since 2009, over thirty distinguished artists such as Barry McGee (United States), Kenny Scharf (United States), JR (France), and Banksy (England) to name a few, have participated in this long tradition, starting from Brazilian twin artists OSGEMEOS all the way until Matsuyama today.

The place is now known as an art spot and also has become an epicenter of street art and culture.